For those of you who don't know me, I live in a little pink house by the ocean. When we bought it, there wasn't much pink left on the outside 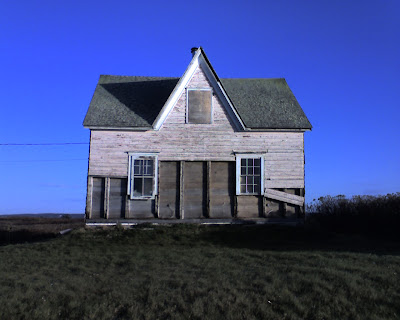 It took about 3 years to restore it so it would be in the pink again.


Although it took much work, and all the money we (and the bank) had, it's a pretty enchanting little spot. One of the delights  of this place was a massive mound of pink and white rosebushes that grew to the east of the house. It was as if the little pink house grew from these roses, rather than the other way around.


The rose bushes bloom their little hearts out from July 1 through til the first frost, and then beyond. I've catalogued the last rose arriving as late as November 21. Patriotic roses that they are, they form a pact to give their biggest show on Canada Day. This year I was up on the ladder staining the house ("Pink?" you ask. "Ah, yes. I reply" rolling my eyes imperceptibly). Just before I fell off the ladder I snapped this shot of the roses doing their thing: 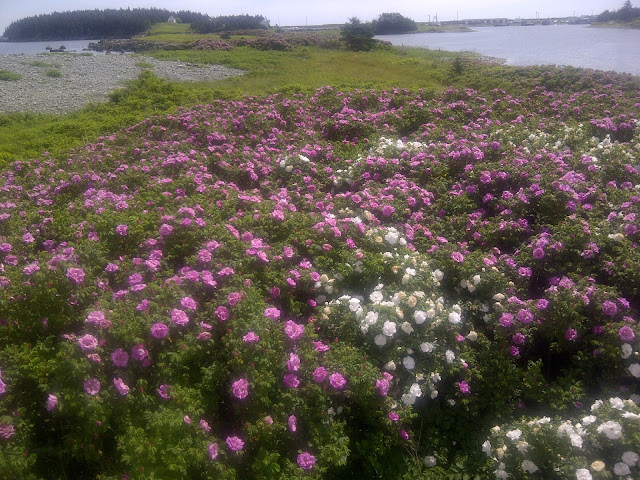 One side of the booming behemoth is white, the other side pink. They now commingle in the spot where the surveyors hacked a swath right through them. They've rebounded, unified and determined. They're spreading. If you look a little further down the point you'll see mound after mound after mound. There was once a road there. Not long ago. As I've discovered, Rosa Rugosa is an invasive species. Can we hold that against them? 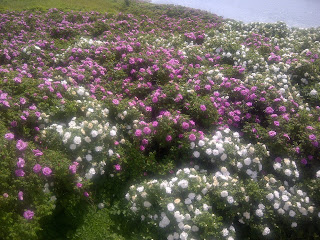 An artist friend recently challenged me to "make some darn art" (thank you Lynda Lou!) from this flowering mass of inspiration. So for her, I'm posting a few of my efforts celebrating the roses of summer and the little pink house:

A few photos of roses taken from inside the house: 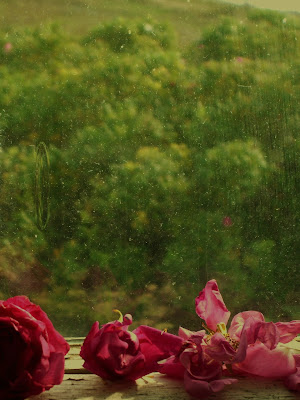 I had the *inspired* idea one day of creating a photo homage to the house by showering and garlanding it with roses. As I was doing this solo I was both the thrower of petals and the photographer. There was much mad dashing around with petals and cameras. Consequently, every photo is a bit wonky and blurry.  "Tripod?" you suggest, rolling your eyes imperceptibly.

That would've taken the challenge out of it. 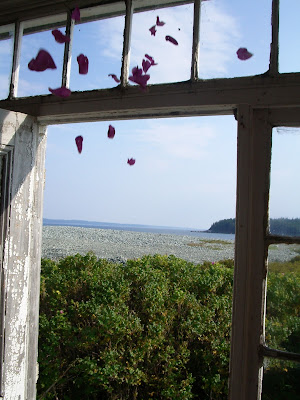 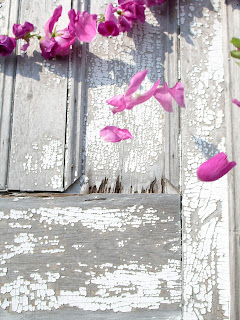 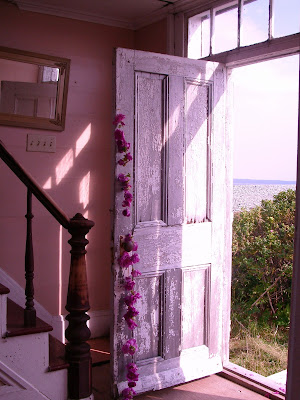 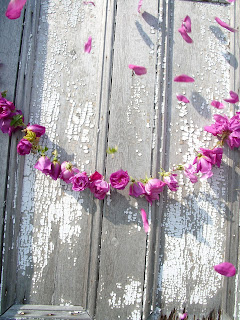 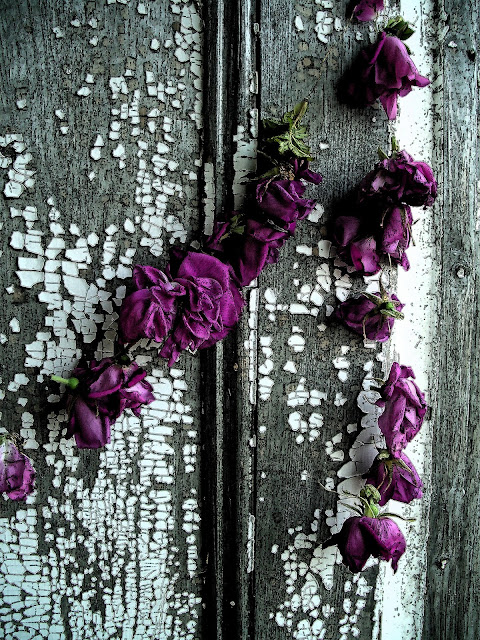 We have experienced roses with all our senses. Breathed, drank and eaten roses. Rose petals, harvested at their prime and placed in a sealed jar with sugar will scent the sugar. I've opened the jars in the deepest of winter and smelled the gentle reminder of summer blooms. 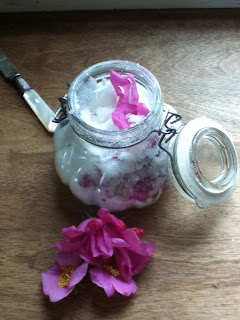 We've made batch after batch of rose hip jelly.  However, it appears that only my mother-in-law Marie has the gift of getting this elixir to gel. Mostly I've made rose hip syrup. But as I like to say, when life gives you roses, make rose (imagine an accent over the e). A bit of it in the bottom of a glass of champagne will blush up your bubbly.


This spring I've been working with this image. 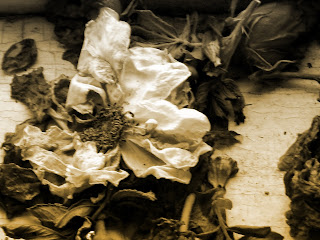 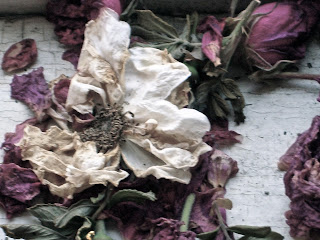 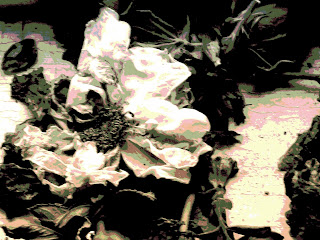 I'm recycling some of the print proofs printed on Japanese paper by using them on lids of handmade boxes: 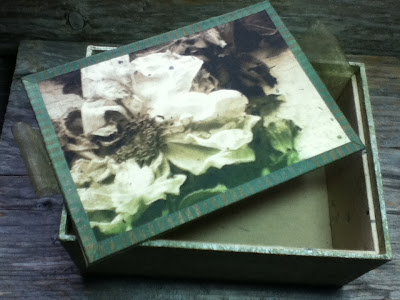 In fact, my love of rose extends to an ambitious project to photograph every pink house on the planet. So far I have two. I may need help with this. 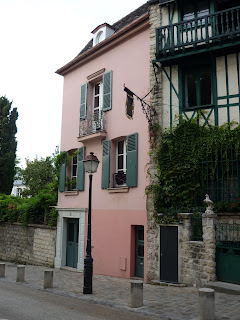 Turns out I even bleed a kind of pinkish colour. But this is not art, this is the by-product of art. Injury. 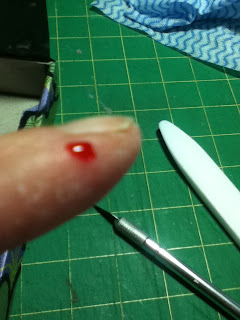 As I am now seriously injured I'm taking some time off of making things and stopping to smell the roses. I hope you get time to smell them too. Before we look again, they will be gone.

Enjoy yourself. It's later than you think.

Enjoy yourself. While you're still in the pink. 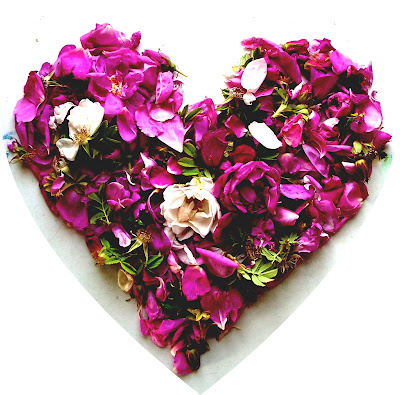 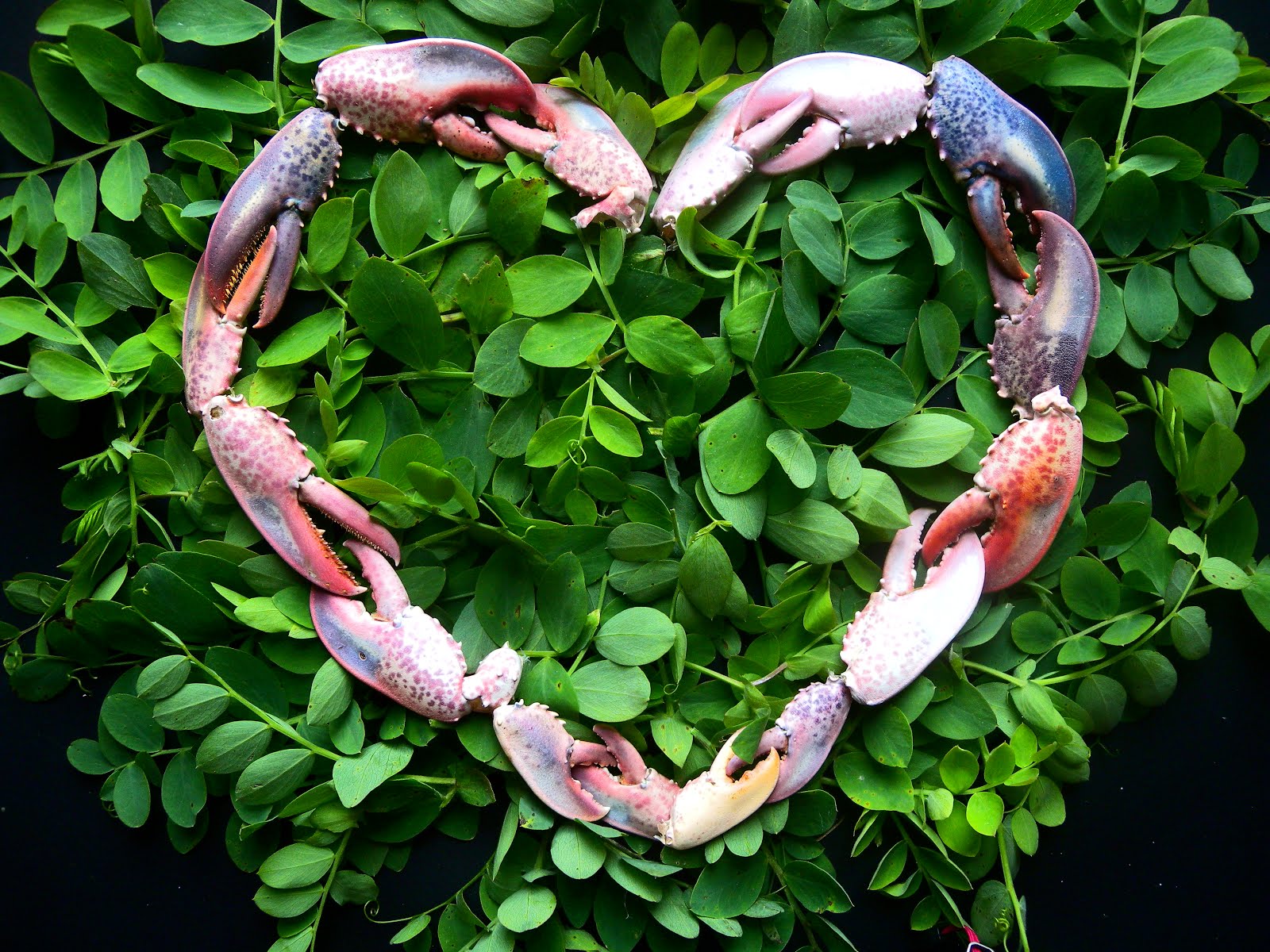